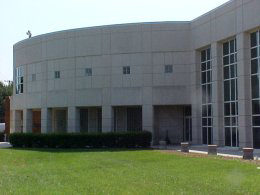 The original courthouse was constructed for $6,400, or around $163,000 in 2009. It was a small, cube-shaped 2-story building that met the needs of the small population of Alamance County at that time. It featured a roof made of either tin or zinc, although there are some indications that it may have been copper at some point during its lifetime. It also featured a cupola with a large 400 lb. bell at the very top. That bell, believed lost for many years, was recovered in the 1990's and is now the featured attraction at Sesquicentennial Park in the Courthouse Square in Graham.

In the 1880's, having survived 30 years of progressively heavier use, a Civil War, occupation by troops, and a host of other local events, the courthouse was beginning to show its age and space limitations. $7,500, or around $177,000 in 2009 money was spent to add 2 wings to the east and west ends of the courthouse and to stucco the entire building. The increase in size made each story of the building about the size of a modern, small fast food restaurant.

The next major addition to the courthouse grounds was a memorial statue to Confederate soldiers added and dedicated on May 21, 1914. The name of the soldier at the top of the statue is "Conrad" (pronounced koon-rahd). This would be the last major addition to the courthouse grounds before space limitations forced the county commissioners to approve the demolition of the original courthouse and the construction of a new, larger facility.

The original courthouse was demolished in 1923.

From 2009-2011, the Historic Courthouse underwent its largest renovation ever. Throughout the years, massive damage had been done to the structure of the building due to its leaking roof, burst pipes, and normal wear and tear. Most of the damage you'll see in the pictures linked to the right is done by water. While the leaking roof was repaired in the 1990's, the damage done by the water over the years was not repaired, and so the deterioration of the building continued. Other issues besides the deteriorating structure included asbestos found throughout the building. Asbestos was a common building material in the 1920s, but in the 1970's, it was found to be dangerous, and so, during the renovation, it was removed.

Click here to see Pre-Renovation Pictures of the Courthouse