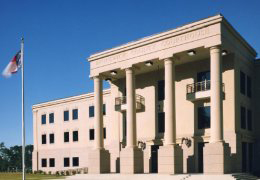 Brunswick County lies in the South-Central part of Virginia on the North Carolina border. The county seat, Lawrenceville, is 64 miles southwest of the state capital in Richmond and 75 miles northeast of Raleigh. The county has three incorporated towns: Lawrenceville, Alberta and Brodnax. Brunswick County consists of 579 square miles of generally flat or gently rolling land. Elevations range from 150 to 315 feet above sea level. Drainage is provided by the Meherrin, Nottoway and Roanoke Rivers and their tributaries.

The county was formed in 1720 and named for the House of Brunswick, which had assumed the English throne in 1714. Fort Christanna was the county's first settlement. The county has many historical sites including plantations and gristmills. As of the 2000 census, Brunswick County had 18,419 residents.

In addition to the late Greek Revival courthouse, built in 1854, the Courthouse Square includes a clerk’s office (built in 1893), a Confederate war memorial (1911), a Colonial Revival library (now a museum) (1941), and a large new Colonial Revival courthouse (1997). Substantial additions were made to the 1854 courthouse and the clerk’s office in the 1920s and 1930s. The square also may include archaeological deposits associated with an early jail and an earlier courthouse built in 1784 in the vicinity of the library/museum. The Brunswick County Courthouse Square was listed in the NRHP and the VLR in 1974, and the courthouse building underwent rehabilitation the following year.