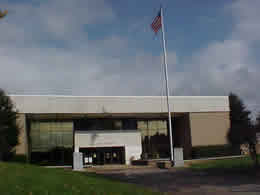 Burke County’s first courthouse was built of logs in 1785 about eight years after the county was formed. A second and more substantial building was constructed in 1791 and served as the county Courthouse until 1833 when a two-story building was authorized by the General Assembly. During the last year of the Civil War, Federal raiders under General George Stoneman allegedly threw many court records out on the courthouse square and burned them. In 1901, a complete remodeling was done. Until vacated for the new courthouse in 1976, the Old Burke County Courthouse was the oldest public structure still being used for its originally designated purpose in western North Carolina.

Burke County’s roots go back to the days of the earliest settlers in the Catawba Valley Basin. In November 1776, the fifth and final Provincial Congress of North Carolina convened and adopted a North Carolina State Constitution. In conformity with the new constitution, the first General Assembly convened in 1777. An act was passed, dividing Rowan County and establishing a new county as of June 1, 1777, named in honor of Thomas Burke, then a representative in the Continental Congress and later to be the third governor of the state. Governor Burke was born in Ireland and later migrated to Orange County.

The new county of Burke comprised such a large territory that it later became the mother of all or part of 16 counties including Buncombe, Catawba, Mitchell, Madison, Yancey, Caldwell, McDowell and Alexander. In 1834, Burke County was reduced to its present size of 514 square miles.