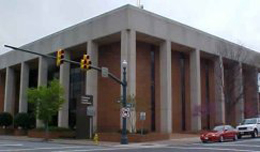 Cabarrus County was created from Mecklenburg County in 1792. It was named in honor of Stephen Cabarrus of Edenton, several times a member of the North Carolina State Legislature and four times Speaker of the House of Commons. In 1795, an act was passed naming commissioners to erect a courthouse on the land of Stanley Hugey, which had already been selected as a proper place for the county seat. They were to lay out the town of Concord. Concord was incorporated in 1806 and has been the county seat ever since. There are also missing records from Cabarrus County, partly as a result of a courthouse fire in 1876.

Cabarrus County is a county located in the south-central part of the U.S. state of North Carolina. As of 2010, the population was 178,011. The county seat is Concord[1], which was incorporated in 1803. Among its significant historic sites is the Reed Gold Mine, a National Historic Landmark.