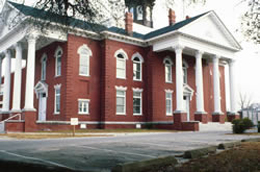 Carteret County, North Carolina was formed in 1722 out of Craven County. It is named in honor of Sir John Carteret, who later became the Earl of Granville and one of the Lords Proprietors of North Carolina. Beaufort, Carteret’s county seat, is the third oldest town in North Carolina. It was first known appropriately as Fishtown because the fishing industry was and has been an important part of the county’s history. Beaufort was later named for Henry Somerset, Duke of Beaufort.

The impressive (Carteret County Courthouse) Queen Anne-style building is located in the seacoast town of Beaufort. It was designed by Herbert W. Simpson of New Bern, North Carolina and built in 1907. The courthouse shown here replaced a small, white one-story frame building, which has been preserved since 1796.