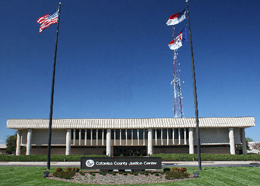 Catawba County, North Carolina, is located in the western part of the State in the foothills of the Blue Ridge Mountains. It was established on December 12, 1842 and, on January 8, 1845, Newton was selected as the County seat. It was one of the first counties of the 100 counties in North Carolina to adopt the county manager form of government (March 1, 1937). The Board of Commissioners has five members elected on an at-large basis to staggered four year terms.

The Catawba County Museum of History offers testimony to the hardy settlers of the Catawba River Valley and their resourceful descendants who carved a world-renowned furniture and textile empire out of the backwoods.

It is the story of the American Dream as perceived by the self-sufficient Scotch-Irish, German, English, and African peoples who followed the Native American trails along the Catawba River in search of a place to call home. The story is artfully displayed in the unique setting of the former Catawba County Courthouse, an imposing National Register Renaissance Revival structure built in 1924, on the square in downtown Newton.

The stately elegance of the 1924 Courthouse is an attraction in itself. Sited in downtown Newton on a grassy square with mature oaks, the Renaissance Revival structure was designed by Willard G. Rogers of Charlotte and built by J. J. Stout for $250,000.

The two-story courthouse is faced with Indiana limestone and composed of two wings flanking a main block, whose second level, the courtroom, is treated as a piano nobile. This level’s engaged Ionic columns divide the bays, setting off the arched windows, and carry a simple entablature and stone balustrade. The east and west entrances are surmounted by an entablature displaying the seal of justice on a center cartouche.

The interior is characterized by the same refinement of ornament as the exterior. Delicate plaster moldings and cornices are found throughout. The north entrance’s sweeping staircase, with marble treads and risers, is embellished with a brass rail supported by spiraling iron balusters. Above the stair, a rectangular stained-glass sky light, set in a deep molded frame enriched with delicate anthemia, catches the eye before the courtroom proper, where a portrait gallery of local judges and attorneys, begun by Judge Wilson Warlick, bands the entire chamber. The room’s Corinthian pilasters, each with reliefs of Blind Justice (the Roman goddess Justitia, from the Greek forerunner Themis), and other ornaments reminiscent of Federal style Roman forms are unusually delicate for a public building, even one in the Neo-Classical Revival period’s most sophisticated stage, as exemplified in the 1924 Catawba County Courthouse.