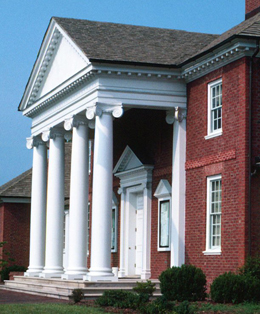 The U.S. National Register of Historic Places lists the Courthouse to be a National Historic Landmark. It is in use today, as it has been since 1767, following a major renovation funded by the State of North Carolina. The Chowan County Courthouse is considered one of the finest Georgian public buildings of the southern colonies. The structure is listed on the National Register of Historic Places and is a National Historic Landmark. It has been used by untold number of judges and even a President and a Prince. Charles Heatherly in his Courthouses of North Carolina said:

"We are indebted to Virginia aristocrat William Byrd for this elegant building that has survived two centuries. Byrd, who did not have a high opinion of his North Carolina neighbors and was never reluctant to express himself, took one look at the old 1718 wood courthouse, which cost 187 pounds, and said, 'it has the appearance of a common tobacco barn.' Shamed by Byrd's acerbic tongue, the people of Edenton responded."

Many consider the Courthouse to be among the finest examples of Georgian architecture used in the design of a public building. For nearly 250 years it's strength of design has symbolically communicated justice and its bell tower serves as a beacon for all to defend freedom. Trolley tours as well as walking tours departing the Historic Edenton Visitor's Center have an opportunity to see the Courthouse up close.

Oldest town Edenton was one of the fledgling nation's chief political, cultural, and commercial centers. The state's first colonial capital, it was established in the late 17th century and incorporated in 1722. Once its second largest port, Edenton provided slaves with a means of escape via the Maritime Underground Railroad before Emancipation.