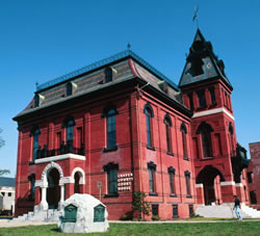 Established in 1712, Craven County is named for William, Lord Craven, one of the original Lord Proprietors of the Province of
Carolina. New Bern became the seat of the Craven Precinct (County) in 1722, and in 1770 Tryon Palace, seat of the royal governors was completed. Following the Revolution, the Palace was used by four state governors, and visited by George Washington during his
Southern tour in 1791. Because of its location, situated between the Albemarle and Cape Fear, Craven County grew in size and importance during the mid 18th century, due to the significance of its county seat, New Bern, as a river port. As Craven County moved into the 19th century, it continued to flourish as the railroad served to further New Bern’s commercial dominance, wealth and cultural sophistication. These influences were also felt in the communities surrounding the city. During the Civil War, Union troops captured New Bern in the early phases and continued its occupation throughout the war. As a result, the area did not experience as much devastation as did many areas of the South.

The 20th century brought the military into Craven County, with the establishment of Marine Corps Air Station Cherry Point. This
development translated into new prosperity for the area, as well as greater diversity. Over the years, as military personnel retired, many chose to settle in Craven County. In the last few decades of the 20th century, Craven County became a preferred retirement destination for legions representing every region of the country, who find its climate, quality of life, cost of living and amenities to be quite desirable.