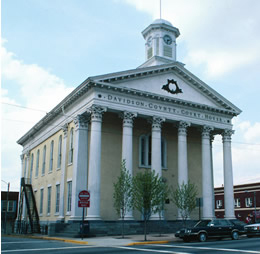 Davidson County is comprised of forty three districts, and her courthouse stands in Lexington. Davidson has gained some measure of national recognition in recent years for being home to a number of notable citizens, not the least of whom being former Sheriff Gerald Hege. Hege first won office in 1995 on a "No Deals" platform, and the rambunctious Vietnam vet soon had the slogan emblazoned on all his deputies' squad cars.
His personal patrol vehicle was a 1995 Chevrolet Impala with a Chevrolet Corvette engine and nitrous oxide tanks. His department lost its insurance coverage when he boasted that he had driven the vehicle at speeds of up to 140 mph. The car was referred to as "The Spider Car" because of a custom paint job featuring a Black Widow Spider and the letters "DDT." The windows of this and all other patrol cars of the force were tinted dark black.

Hege took Buford Pusser and Joe Arpaio as role models. Hege ordered all deputies to dress in paramilitary fatigues and combat boots; Hege dressed this way himself, despite the tradition of business attire for Davidson County sheriffs. Hege reinstuted the use of chain gang prisoner labor. He also removed the television sets and books (except for the Bible) from the county jail. (In a sign of things to come, Hege made sure the televisions were removed in full view of the local news media.) The jail was repainted in pink with weeping blue teddy bears. Prisoners also wore color coordinated jumpsuits to identify their offense: Blue for misdemeanors, green for sex offenders, and orange for felons. The jumpsuits were striped in the old-fashioned manner as opposed to the modern solid color. Hege carried a Heckler & Koch MP5 instead of a service revolver. The sheriff also kept the robes of eight former Ku Klux Klan members whom he claimed he had convinced to retire. Hege also claimed that Mafia hitmen had a bounty on his head, as he interrupted the flow of drugs through Davidson County. These claims could not be verified.

As Hege's national fame grew, he became the star of a Court TV program titled "Inside Cell Block F." The show was filmed inside the jail, and the inmates were the studio audience. In addition, Hege appeared on "Larry King Live," "20/20" and "America's Most Wanted," as well as other programs. Rumours circulated that Hege intended to run for governor of North Carolina, though Hege denied these rumours.

After 9/11, a Christmas card sent out by the Sheriff featured him in the desert wearing a black jumpsuit, with a bloody sword and the severed head of Osama bin Laden with the title "Happy Ramadan." This incident sparked statewide controversy and an ACLU investigation.

Ostensibly to raise money for charity, Hege created a line of merchandise centered on his public persona. Hege merchandise items included posters, die-cast "spider cars," action figures, coffee mugs and barbecue sauce. All revenue from this merchandise and his TV appearances was donated to chari