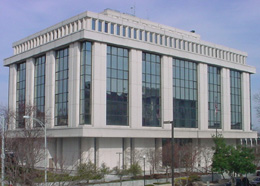 As early as colonial days, the area known as Durham County was important to North Carolina history. English, Scots and Irish settled along the waterways of the present northeast corner of the county on land given to the Earl of Granville by the British Crown. As a result of the hard work of those early settlers, the area soon became a progressive and prosperous section of the state.

The City of Durham began as a railroad station and settlement named for Dr. Bartlett Durham. While the official birthdate is April 26, 1853 when the U. S. Post Office was established, the town was not incorporated until April 10, 1869. The tobacco manufacturing industry focused worldwide attention on the area after the Civil War. As a result of that thriving business, Durham grew and prospered tremendously.