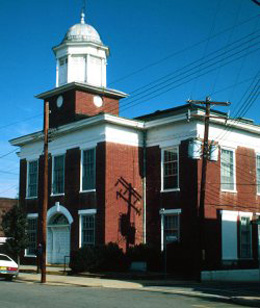 The town's history dates to 1761, when local legislator Samuel Benton built a plantation home and called it Oxford. The legislature ordered the area around his plantation to be the seat of Granville County. The city was not incorporated until 1816.

The first Masonic orphanage for children in the United States was built in Oxford. It was originally established as St. John's College in 1858. The college floundered however, and in 1872 it was suggested that the property be used to educate the less fortunate. In December 1873 the first residents were admitted to the Oxford Orphans Asylum which is today known as the Masonic Home for Children.

In 1851 James H. Horner established Horner Military Academy which served many young men from New York, Pennsylvania, Virginia, South Carolina and many other states. Many of the students went on to become leaders in the United States government such as James Crawford Biggs, Solicitor General under President Roosevelt at the inception of the New Deal. The Oxford Female College was also established in 1851 by the North Carolina Baptists. After suffering financial difficulties the college was sold and it became a private educational institution renamed Oxford Female Seminary. In 1880 F. P. Hobgood took over leadership of the school and the school grew in reputation and excellence until his death in 1924. The school closed the following year.