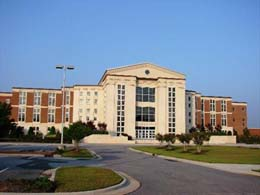 Harnett County is a member of the regional Mid-Carolina Council of Governments. It was formed from parts of Cumberland County in 1855. Named for American Revolutionary war hero Cornelius Harnett, who was also a delegate to the Continental Congress. The first settlers came to the region the mid 1720's, and were followed by the Highland Scots. The Scots settled in the foothills rather than in the rich alluvial soil area of the coastal plain. After the defeat by the British of Bonny Prince Charles at Culloden, the Scots came up the Cape Fear River in ever increasing numbers and settled in western Harnett County. The British also settled along the banks of the Cape Fear River in the coastal area, generally from Erwin to Wilmington.

During the Revolutionary War the Scots, who were forced to take ironclad vows never again to take up arms against the British, were considered as traitors. Since their activity assisted the British against the Continental Army, public executions were not uncommon. One site near Lillington was the scene of a mass execution of "Scots Traitors."

One of the last battles of the Civil War took place at Averasboro near Erwin. General Sherman's army, on its March to the Sea, defeated the army of General Hardee and proceeded eastward. The centennial celebration of that event was held at the site of the battlefield in 1965.