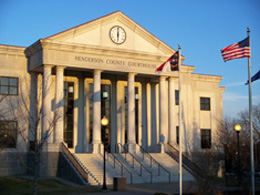 Henderson County government was centered in the 1905 county courthouse on Main Street, until this structure was replaced by the new courthouse (c. 1995) on Grove Street in Hendersonville. The first rail line reached Hendersonville in 1879, ushering in a new era of access to the outside world. However, parts of the county had long been known as retreats, including the "Little Charleston" of Flat Rock, in which South Carolina's Low Country planter families had maintained second homes since the early 19th century.

A major land boom ensued in the 1920s, culminating in the crash of 1929, which severely deflated prices and left structures such as the Fleetwood Hotel atop Jumpoff Mountain incomplete. Population growth in the county has been rapid since the 1960s as a result of an influx from the North, with extensive housing developments now occupying areas that were formerly largely rural.

Other notable historic sites in Henderson County include: the Woodfield Inn (1852), Connemara -- final home of Carl Sandburg (originally known as Rock Hill, the home of CSA Secretary of the Treasury Christopher Memminger) -- and the St. John in the Wilderness Episcopal Church.