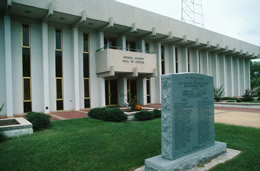 Iredell County is located within the Piedmont Region of central North Carolina. The northwestern section of the county contains the Brushy Mountains, a deeply eroded spur of the Blue Ridge Mountains far to the west. The highest point in Iredell County, Fox Mountain, is in the Brushies; it rises to 1,760 feet. Although the "Brushies", as they are often called locally, are not high in the normal sense, they do rise prominently above the surrounding countryside. The remainder of Iredell County consists of gently rolling countryside occasionally broken by low hills and small river valleys. The county's largest river, the Catawba, forms much of its western border. Lake Norman, North Carolina's largest manmade lake, is the most prominent geographic feature of southern Iredell County; it is often called North Carolina's "inland sea".