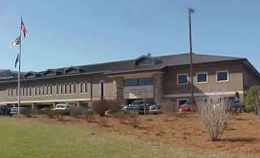 The Jackson County Courthouse is situated on a hill at the end of main street, and there are 107 steps leading up to its front portico from the fountain and plaza at street level. This is a dramatic site for such a wonderful building. It was built after C.J. Harris pushed the county to vote for the removal of the county seat from Webster (Where it had been since 1851) to Sylva, and the measure passed and the seat was relocated. Harris then as part of the agreement built a courthouse with the sum of money not exceeding $30,000. The building was patterned after the Madison County Courthouse in Marshall, North Carolina.

The 1913 Courthouse served as the county's courthouse from 1914 until the present Justice Center was built in 1994 on Grindstaff Cove Road east of town near US 74. It had been previously renovated in 1950 with the mezzanine third floor was painted white and four windows were added to the front and back of the third floor. It was renovated again in 1969, when the red bricks were painted white, a clock added to the dome, the pine trees along the steps that hid the building from the street and lined the steps were also removed. In 2007, the Courthouse site was selected for the location of the new Jackson County Public Library. The old Jail from 1963 was demolished at this time, and the original jail from 1913 was demolished in 2009, when the new library started being constructed, The Jackson County Courthouse was listed on the National Register of Historic Places in 1979.