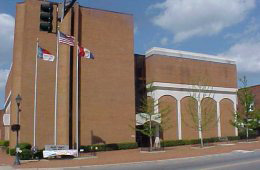 In describing the county, John Preston Arthur wrote in 1914 that "Macon was organized into a county in 1828 and was 'singularly fortunate in the character of the people who first settled it.' William and Jacob Siler having married sisters of D. L. Swain, and Jesse R. Siler having married a daughter of John Patton of Buncombe, sister of the late lamented Mont. Patton, it is not difficult to account for the great moral worth of the county that now exists and has from its first settlement."
Much more need not be said. Today Macon County carries on in the grande old tradition, righteously judging transgressors of her law in the Macon County Courthouse, located in the town of Franklin. Of her estimated thirty thousand permanent tax-paying residents, nerly ninety nine percent are of "white" heritage, with roughly one percent considered "black", and fewer than one percent describing themselves as being of other races, with the exception of "Hispanic", a percentage calculated at roughly one and a half percent. The median household income is roughly thirty thousand dollars, and about twelve percent of the population is reportedly living below the 'poverty line'.
The county is home to a number of fine waterfalls, and through it runs the ancient Nantahala River.