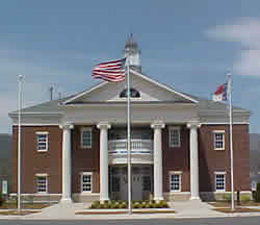 In 1993, the Bakersville Improvement Group [BIG] conceived of a project to preserve the Historic Courthouse (placed on the National Historic Register in 1979) which had been left unoccupied when the new Mitchell County Courthouse was completed. The good intentions of BIG were thwarted however when a devastating flood ravaged much of Bakersville and demanded that priorities be shifted, at least temporarily. Meanwhile, with county coffers limited ordinarily by a limited tax base, the strain of responding to the flood, a tragic fire that killed eight people in the jail attached to the Courthouse, and the continued bleak job opportunities for the people, the “old” Courthouse itself was all but forgotten.

The building fell into general disrepair with severe water damage to the upper floor caused by a much neglected roof. Local merchants and residents of the Town attempted to maintain the grounds, but the interior continued to worsen.

The building was not forgotten by a number of citizens who were convinced that its historic character and potential to serve the people of Mitchell County were valuable assets to the culture and economy. The voices included members of the Mitchell County Historical Society who drew compelling attention to the embarrassing condition of the building and its potential as a renovated facility. Fortunately, the County Commissioners heard these voices and responded by appointing a committee to study the situation and condition of the building and to develop a set of recommendations that would determine its future.

Over the 4 years, three committees have been appointed by the County Commissioners to address the issues surrounding the Historic Courthouse. Each has provided unique and significant contributions to the ultimate goal of going beyond just preserving the building to making it place rich with activities and programs that will provide noteworthy returns on the restoration investments. For example, the first committee completed an environmental scan which cataloged the conditions of the building, determined how other communities have elected to use buildings of a similar nature, and recommended a number of specific educational and programmatic uses for the building that are reflected in the present goals of the Foundation. As a result of the second committee’s efforts and generous support from the Mitchell County Historical Society, the County Commissioners, the Town of Bakersville, and other residents of the County, a new roof now protects the building from further deterioration and the exterior of the building has been stabilized and painted. The third committee began by conducting a series of town meetings throughout the County seeking input and suggestions as to what the people wanted the Historic Courthouse to be, become, and serve. The accumulated conversations guided the Committee’s deliberations and resulted in outcomes which included retaining an architect to complete preliminary drawings, a celebration of the Centennial of the Historic Courthouse, and a list of recommendations one of which was leasing the building for 99 years to the Mitchell County Historic Courthouse Foundation for educational, cultural, and economic development purposes.

The Foundation was formed by members of the third Historic Courthouse Committee drawing in other representatives from government, human service, education, and civic organizations in the County.