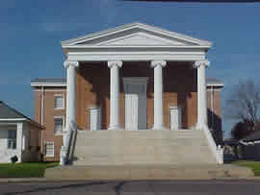 The town of Jackson can trace its origin back to the creation of Northampton County in 1741 by the Colonial Assembly of North Carolina. The location was determined in an attempt to find a central site for the courthouse. Soon after the courthouse was built, the site began its role as a gathering place for people from all over the county. By 1819 a second courthouse had been erected by a local builder named William Grant.

The year 1831 saw, completed on the southwest corner of the courthouse square, a fireproof Clerk’s and Register’s Office. Today this is the oldest surviving public building in town. It was constructed as a result of the burning of the statehouse in Raleigh that same year. Of interest also are cracks in the east and west walls as a result of the Charleston earthquake of 1886.

By the middle of the nineteenth century, Jackson could be called a town, and the building that still dominates the settlement and has become a symbol for the county was constructed. In 1858 the third and present courthouse was begun. Samuel Calvert served as Superintendent of Public Buildings and Henry King Burgwyn has been traditionally credited as the architect. This noble structure is among the few surviving examples in our state of the full-blown Greek revival, temple form, public building. It is also without doubt one of the most beautiful.

The courthouse in Jackson was almost new when the War Between the States came. In July 1863 Jackson was occupied by the Union troops of Colonel S. P. Spear. General Matt W. Ransom of Verona Plantation, located just west of Jackson, was Northampton County’s most prominent soldier. When Colonel Spear arrived in Jackson, General Ransom had his troops at Boone’s Mill between Jackson and Verona, on the road to Weldon. When Spear reached Boone’s Mill he was forced to retreat without burning the railroad bridge on the Roanoke River that had been his goal.

Today, Northampton County still beckons to those in search of nature’s bounty, to those seeking new opportunities in commerce, and to those searching for the peace of rural America.