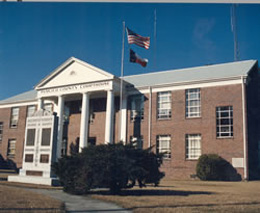 Pamlico County was first settled by the Europeans in the early 1700's. The area was already inhabited by the Pampticoe Indians. These Indians call Pamlico "TaTaku" which means where the land and the sea meet the sky. After the Tuscarora war in 1711, Scots and English colonist came to the area. Settlement was slow, however, because the county is on an isolated peninsula. The earliest settlements were at the heads of rivers, creeks and bays. The interior of the county was settled as the road system was developed. What is now known as Pamlico County was formed from part of Craven County in 1872 and from parts of Beaufort County in 1874 and 1875.

The county is largely bordered by water: Goose Creek and Pamlico River on the north, the Upper Broad Creek forms the county's western boundary with Craven County: Pamlico Sound lies to the east; and the Neuse River to the south. The mixture of farmlands, trees, marshes and open waters makes Pamlico County an attractive place to live, work and visit.