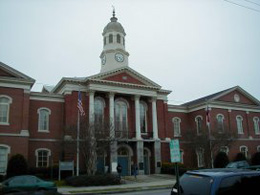 Aside from its history, some interesting parts of Pasquotank County's folklore is based on its location along rivers. Along the Pasquotank River, just above the central part of Elizabeth City, is the Brick House. The story is told that the house was used by by Edward Teach, better known as the pirate Blackbeard, as one of his headquarters. According to legend, the basement was used by the pirate as a dungeon for prisoners taken during sea raids. A secret tunnel, now closed, led from the basement to the adjacent river. Through this passage, Blackbeard is alleged to have escaped to his awaiting ship. It is almost impossible for the tale to be true. The house dates from the 1750s, and Blackbeard died in 1718. However, there is a slab of granite sunk near the house's steps that is dated 1709 and bears the initials E.T.