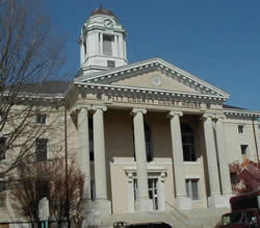 Pitt County got its name from William Pitt, Earl of Chatham. William Pitt was an English statesman and orator, born in London, England, UK. He studied at Oxford University and in 1731, Pitt joined the army. Pitt led the young "Patriot" Whigs and in 1756 became secretary of state, where he was a pro-freedom speaker in British Colonial government. Pitt County was founded in 1760 under British Colonial government. Prior to 1760, there was one large county, Beaufort, which was split into five smaller counties, Pitt County being one of those smaller counties. Since 1970 Pitt County has operated under County Manager government.

Pitt County was selected from over 300 communities that applied from all fifty states. The 100 Best competitions recognize local communities for the outstanding and innovative work they are doing to help young people succeed.