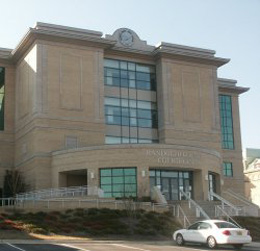 At the July 1, 1907, meeting of the Randolph County Board of Commissioners there was a lengthy discussion of the need for a larger, more conveniently located building for the county offices.i Commissioners J.W. Cox, H.G. Lassiter and Chairman Arch N. Bulla of Randleman were then meeting in the 6th Randolph County Courthouse built in 1839 at the intersection of Salisbury and Main Streets in Asheboro. That brick structure had been built by construction superintendent (and future Governor) Jonathan Worth, and expanded in 1876, but it had lost its place as the focal point of Asheboro almost 20 years before. With the completion of the High Point, Randleman, Asheboro and Southern Railroad on July 1, 1889, the village had begun a gradual migration of businesses and services from the 1792 courthouse center toward the Sunset Avenue railroad stations.

The 1839 courthouse was demolished and its bricks used to build a new county jail in the rear of the building in 1914; a county agricultural building and health department headquarters where later added to the complex. A sizeable addition for the register of deeds and clerk of court was built in 1950 at a cost of $100,000; it provided offices for the Clerk of Court, Register of Deeds, Tax Department, and county School Board. In 1975 the annex was remodeled to provide addition courtroom space, and it was expanded again in 1979 to provide space for two more courtrooms and an even larger Register of Deeds. In 1998 planning began for the eighth Randolph County Courthouse, and after that structure opened in July 2002, the 1914 jail and the 1950 courthouse annex was demolished. As part of the new construction, the 1909 courthouse received a new roof and exterior paint job in 2001, but was mothballed, awaiting future
renovation, once court activities moved to the 2002 building.