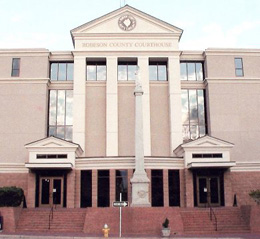 Robeson County, formed in 1787 from Bladen County, is named in honor of Colonel Thomas Robeson. Colonel Thomas Robeson served as one of the leaders in the Revolutionary War at the Battle of Elizabethtown. Lumberton, the county seat, was established contrary to other published information prior to 1788. The act that incorporated Lumberton in 1788 mentioned that a "town had already been established". The first Robeson County courthouse was erected on land which previously part of the "Red Bluff Plantation" which was owned by John Willis, who proposed the town name "Lumberton".

Anglos who settled from the Scottish Highlands in the early 1730s found the local American Indians, descendants of the Tuscarora, Cherokee, Cheraw and remnants of other tribes speaking English. They also found a group of both freed and runaway slaves living in the area. Today, Robeson County is home to the Tuscarora and Lumbee Tribes. According to the 2000 Census, Robeson County has the ninth largest population of American Indians in the United States. Robeson County is a true multi-racial county.