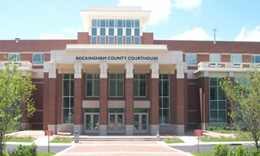 The North Carolina General Assembly created Rockingham County from the northern portion of Guilford County on December 29, 1785. The new county was named for Charles Watson Wentworth, the Second Marquis of Rockingham, who served as Great Britain’s Prime Minister from 1765-1766 and in 1782. In 1786 the first session of the Rockingham County Court of Pleas and Quarter Session convened at the home of Adam Tate at Eagle Falls on the south side of the Dan River. A site for a county seat was secured in 1787 on the land of Constantine Perkins and Charles Gallaway near the center of the county. The site was located on a high ridge just east of Rockhouse Creek between Bear and Rocky branches. Public buildings were then constructed and the county court convened in the new courthouse in November 1787. Action by the General Assembly in 1798 established the town of “Wentworth” at the county seat.

Following the overthrow of the Confederate Government, the North Carolina Constitution was rewritten in 1868, by draftsmen familiar with the forms of local government in states such as Pennsylvania and Ohio. This new constitution greatly changed county government. The county was divided into townships (now numbering eleven) in which the voters therein elected two justices of the peace and a clerk to serve as the governing body of the township. Each township also had one constable. The township system never developed to a great extent in the state and today exists only for administrative purposes.