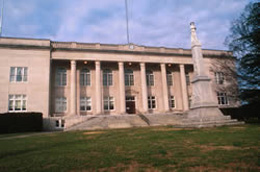 The Town of Rutherfordton was formed in 1787 to serve as the seat of government for Rutherford County. Both the County and the Town are the namesakes of General Griffith Rutherford, a popular western North Carolina politician and general during the Revolutionary War period. Rutherfordton replaced the small village of Gilbert Town (once located 3 miles north) which served first as the county seat of old Tryon County during the Colonial period and continued to serve in that capacity when Rutherford County was formed in 1779. Because the move from Gilbert Town to Rutherfordton caused no interruption in the official business of the county or the local court, Rutherfordton holds the distinction of being home to the oldest continuing body of government in western North Carolina.

In 1995, much of downtown Rutherfordton was listed on the National Register of Historic Places, including more than 45 commercial and public structures. In addition, six other properties in town are listed independently on the National Register, including: St. John’s Church (1849), the Carrier Houses (1835, 1879), the Rutherford County Court House (1926), St. Luke’s Chapel at Rutherford Hospital (1907), and the original Rutherfordton-Spindale Central High School building (1925), now R-S Middle School.

The Rutherford County Courthouse and the Norris Public Library, both located on Main Street were designed by Louis H. Asbury (1877-1975). Asbury is noted as one of North Carolina’s most important and prolific architects of the 20th century. He was a master at Classic-Revival style architecture which is evident in his designs for the court house. This building, which commands an entire block on the west side of Main Street, is sheathed in Indiana limestone and boasts six towering columns fashioned with Corinthian columns featuring acanthus and lotus leaf motifs. An impressive granite monument commemorating the men and women of the Confederacy is located on the courthouse’s front lawn.

Today, Rutherfordton is home to approximately 4,200 residents. The downtown commercial district is alive with a variety of traditional and specialty shops and businesses that complement the eclectic mix of the town’s citizenry. The downtown historic district and immediate residential neighborhoods encompass more than 150 public, commercial, religious and residential buildings and homes, most dating from the late 19th or early 20th centuries, that display a wealth of architectural styles and historic periods.