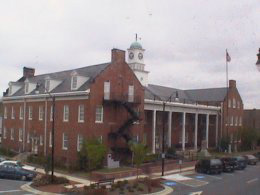 Sampson County was established in April of 1784 by the North Carolina GeneralAssembly from an area taken from neighboring Duplin County. Land from Wayne and New Hanover counties would be annexed later. Our early settlers were Scotch-Irish immigrants from North Ireland, many of who came to the colony of North Carolina under the protection and inducements of Henry McCulloch, a wealthy London merchant. In 1745, McCullough had obtained grants from the British Crown covering some 71,160 acres of land "lying and situated on the branches of the North East and Black River." The Scotch-Irish immigrants were soon joined by descendants of the Swiss colony in New Bern, and sometime later, pioneers from the northern states of New Jersey, Connecticut and Massachusetts.

One of the many Scotch-Irish drawn to the county in search of rich farmland and flowing rivers was John Sampson. Sampson was Duplin County’s first Register of Deeds. He served as a Lt. Colonel, and then a Lt. General in the county’s militia and was later the first mayor of Wilmington, North Carolina. Emigrating with John Sampson was his fifteen-year-old stepson, Richard Clinton. Like his stepfather, Richard Clinton soon distinguished himself in governmental and military service, serving as Duplin County’s Register of Deeds for ten years, and then in the Provincial Congress held at Hillsboro. In 1776, Richard Clinton organized a company of militia minutemen from upper Duplin and led them as captain in the defense of Wilmington against the British. He was later appointed Colonel of Calvary and Brigadier General of the Fayetteville District. Upon the establishment of the state government of North Carolina by the Halifax Constitution of 1776, Richard Clinton served as one of the first members of the House of Commons, representing the County of Duplin. Clinton continued as a representative of Duplin County until the creation of Sampson County in 1784. Clinton secured the passage of the act creating the new county, and proposed the name "Sampson" in honor of John Sampson, his stepfather and benefactor.

Other Sampson County historical figures include: William Rufus King, Ambassador to England and France and Vice President of the United States; Micajah Autry, who battled and died with Davy Crockett at the Alamo; Theophilus Homes, Lieutenant General in the Confederate Army and the highest ranking North Carolinian officer during the Civil War; James Kenan, planter, soldier and legislator; Robert Herring Wright, first President of East Carolina Teachers College; and James Franklin Highsmith, organizer of the Hospital Association of North Carolina and founder of Highsmith-Raney Hospital in Fayetteville.