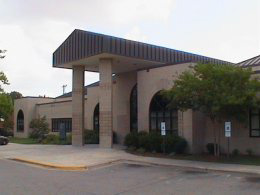 A point of interest in Laurinburg is the county’s new courthouse, built in 1964. The county’s first courthouse was built in 1901, facing Main Street where the A. B. Gibson Education Center now stands. Court was first held in a rented building, and Judge Walter Neal, whose picture now hangs in the Courtroom, held the first term of criminal court in the county the week of November 18, 1901.

On the grounds of the new courthouse are two monuments of historical interest, which were moved from the old courthouse grounds. The Confederate Monument is typical of many erected in the South in the years following the Civil War. Public subscriptions were taken for it, and it was originally placed in the center of the street at the intersection of Church and Main Streets. As automobiles became more common, it proved to be quite a traffic hazard and was moved to the courthouse grounds. The Quakenbush Monument honors William Graham Quakenbush, who was principal of Laurinburgh High School from 1879 to 1900. In fact, the school was locally known as "The Quakenbush School." Mr. Quakenbush was not only a beloved educator, but he was also one of the leaders in the movement to form Scotland County. North Carolina’s Education Governor, Charles B. Aycock, spoke at the dedication of the monument. Recently, a monument has been erected to honor local veterans of all wars.