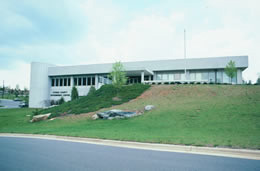 The county was formed in 1789 from Surry County. It was named for John Stokes, an American Revolutionary War captain severely wounded when British Colonel Banastre Tarleton's cavalry practically destroyed Col. Abraham Buford's Virginia regiment in the Waxhaws region in 1780. After the war, Captain Stokes was appointed a judge of the United States district court for North Carolina. In 1849 the southern half of Stokes County became Forsyth County.

During the American Civil War, Moratock Iron Furnace located near Danbury served as a foundry for the Confederate Army. It was destroyed in April 1865 when Union cavalry under the command of General George Stoneman conducted extensive raiding through the region.

Hanging Rock State Park was formed primarily from blocks of land donated in 1936 and contained 6,921 acres (28.01 km2) in 2005. Many of the facilities in the park were built by the Civilian Conservation Corps between 1935 and 1942. The park is located atop the Sauratown Mountains, and contains a visitor's center, a manmade lake, and plenty of hiking trails, climbing trails, picnic areas, and primitive campgrounds.