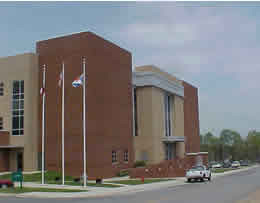 The county was formed in 1771 from Rowan County. It was named for the county of Surrey in England, birthplace of William Tryon, Governor of North Carolina from 1765 to 1771. In 1777 parts of Surry County and Washington District (now Washington County, Tennessee) were combined to form Wilkes County. The first permanent courthouse was established at Richmond in 1779, what is now the modern-day Old Richmond Township in Forsyth County near Donnaha. However, in 1789 the eastern half of Surry County became Stokes County, thus making the Richmond site unusable for either county. In 1790, the county seat was moved to Rockford where it remained for over half a century. In 1850 the half of the county's remaining territory south of the Yadkin River became Yadkin County. The town of Dobson was established in 1853 to be the new county seat.