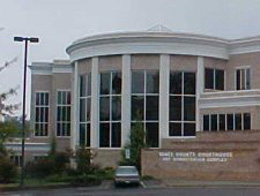 Known as the "Home of Kerr Lake" and member of the Kerr-Tar Regional Council of Governments, this community named after Gov. Zebulon Baird Vance has an estimated population of 43750 residents on this territory located in the Henderson metro area. Granville Community College, Vance County Schools, Kerr-Vance Academy, Victory Christian Academy, and Crossroads Christian Academy are the most important educational homes in Vance County, serving eight townships and four cities including Dabney, Kittrell, Henderson (county seat), South Henderson, Sandy Creek, and Watkins. Almost 1/2 of the population is White Non Hispanic and 1/2 of inhabitants are African American; while just 5% of the residents are Native American, Asian, Pacific Islander, Latino, and other races. According to history and statistics, back in the late 19th century Vance County had more than 6/10 of African Americans out of the population residing in this democratic land which was known as "'Zeb's Black Baby."
(https://www.town-court.com/getTownCourt.php?courtID=4880)