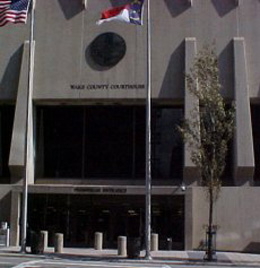 There are over nine hundred thousand people residing in Wake county, add to that number undocumented individuals and travelers, and one can easily imagine there being a million souls in this area at any given time. Wake is the ninth fastest growing county in the United States, and it's courthouse in Raleigh sees a steady flow of individuals accused of everything from traffic violations to murder.

Raleigh was named after Sir Walter Raleigh and established in 1792 on 1,000 acres (4.0 km2) purchased from Lane. Raleigh had never set foot in the North Carolina, but he had sponsored the establishment of the first English colony in North America on North Carolina's Roanoke Island in 1585. The city of Raleigh became both the state capital and the new seat of Wake County.

Wake county was so named for Margaret Wake, wife of Governor William Tryon. The first courthouse was built at a village originally called Wake Courthouse, now known as Bloomsbury.

Today the courthouse has a prominent place in the downtown area, strategically located near both jails, the sheriff's department, and the new, currently under construction "Public Safety Center".