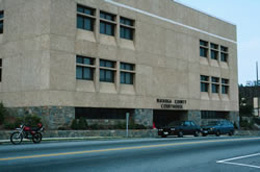 Watauga County was formed in 1849 from Ashe, Wilkes, Caldwell and Yancey counties. It was named for the Watauga River, whose name came from an Indian word meaning "beautiful water." It is in the northwestern section of the State and is bounded by the State of Tennessee [Johnson and Carter Counties] and Ashe, Wilkes, Caldwell and Avery counties. The first court was ordered to be held at the home of George Council, at which time justices of the peace were to decide upon a place for the future courts until the courthouse was erected.

Commissioners were named to select a site for a county seat "which site shall be between Reuben Bartley's and a point one-half mile west of Willie McGee's east and west direction, and between John Pennell's and Howard's Knob north and south direction." They were to acquire the land and lay out a town and erect the public buildings. In 1851 a superior court was established for Watauga, and it directed that court was to be held in the courthouse at Boone. Boone, named in honor of Daniel Boone, is the county seat for Watauga County.