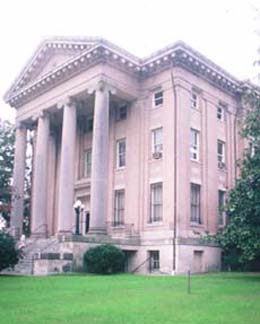 Located on the site of an earlier courthouse that was built in 1850, this beautiful courthouse is listed on the National Register of Historic Places and features a memorial to World War I soldiers on its grounds, as well as a marker denoting the execution of John Lawson by Indians in 1710. Wayne County, North Carolina was founded in 1779 and named for the Revolutionary War hero from Pennsylvania, General Anthony Wayne. Wayne County is located in the east central part of the state in the coastal plain region. The county measures approximately 29 miles from north to south and 14-27 miles from east to west and encompasses 553.97 square miles.

Prior to 1730 Indians and wild animals were the only known occupants of the territory now know as Wayne County. Settlers trickled into the territory, but there was no general movement of immigration until after 1750.

During the Revolutionary War the County of Wayne was carved from Dobbs County and established on November 2, 1779. The County is named for General George Washington's most trusted soldier, General Anthony Wayne who was nicknamed "Mad Anthony Wayne" for his courage and valor.

Goldsboro is the county seat and is situated geographically in the center of the County. The act, establishing the County, provided the first court should be held at the home of Josiah Sasser at which time the justices were to decide on a place for all subsequent courts until a courthouse could be erected. By 1782 the commissioners were named. In 1787 an act was passed establishing Waynesborough on the west side of the Neuse River on the land of Dr. Andrew Bass "where the courthouse now stands."

In 1845, and again in 1847, acts were passed moving the Courthouse from Waynesborough to Goldsboro provided the people voted for the same.