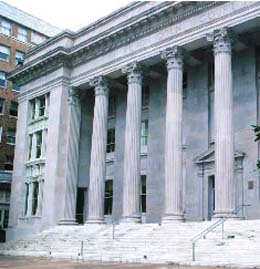 When the first English American settlers reached the region that is now Wilson County in the mid-18th century, they began to transform the dense woodland by chopping the trees for naval stores and planting crops that would feed the growing families of the region. By the beginning of the 19th century, these settlers had founded churches and stores in a clearing near a hickory grove. The settlement grew into a small town which, despite its size, offered citizens educational, social, and business opportunities.

By the mid-19th century, the area had developed to the point that the community of Wilson was chosen as the county seat for the newly established County of Wilson. At this time, the railroad in Wilson County provided access to the port of Wilmington and cultural center of Richmond; the city and county prospered as a trading center at the heart of this vital railroad line.

Following the Civil War, farmers turned from cotton to tobacco, a crop perfectly adapted to the region's sandy soil. Merchants seized the opportunities that the new crop provided, and by the early 20th century, Wilson had become the world's largest bright leaf tobacco market.

The town of Wilson and Wilson County have continued to grow and prosper. Today, the county's farmland produces crops valued at $100 million annually, while the city boasts twenty-two industries that employ over one hundred individuals. Cultural, social, and educational opportunities for citizens of the region have more than kept pace with the growth of the city and the county. Citizens of Wilson and Wilson County take pride in excellent schools, invigorating recreational activities, and rich cultural and artistic experiences. At the center of this history, at the center of all the changes that have occurred here over the past three hundred and fifty years, are the citizens of the town of Wilson and Wilson County, for the history of the region is the history of its people.