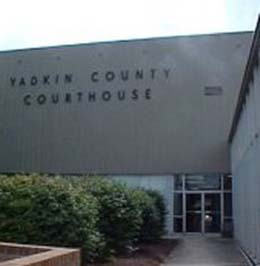 Originally a farming community, flue cured tobacco was the major cash crop grown in Yadkin County. As tobacco use declines, production of other crops continues to increase. Vineyards are now producing grapes to be used in winemaking. The first winery opened in 2000, and currently Yadkin County is home to 14 producing wineries, the largest concentration in the state of North Carolina. The Yadkin Valley Wine Region was the first and remains the largest Federally designated wine producing region, or appellation, in North Carolina. Wines such as Chardonnay, Cabernet Sauvignon, Merlot, Viognier, and Chambourcin are winning medals in competitions throughout the nation.

Land owners and prospective purchasers continue to seek ways to farm profitably in Yadkin, both by increasing size of traditional agricultural enterprises, and by alternative enterprises that have the possibility of greater value added per acre. Some farms will continue to be operated as hobbies or as the traditional "way of life", supported by off farm jobs or other income sources. The value of the county's rural setting to current residents, prospective buyers, and county visitors alike, although difficult to quantify, is a constant in any discussion of land use, tourism, or just as a "nice place to live."